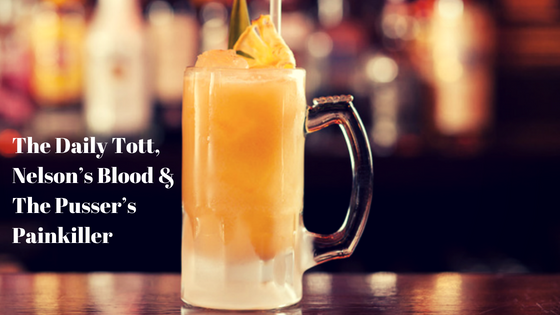 After Admiral Horatio Lord Nelson was killed at the battle of Trafalgar on October 21, 1805, his body was put in a cask of Pusser’s rum to be preserved for the journey home to England. It is said that the sailors on that voyage, drilled a small hole in the cask and drank some of that rum in which he was preserved. To this day sailors will often refer to Pusser’s rum as “Nelson’s Blood”. Though many of the historical references actually claim that it was brandy in which he was preserved, it is a good story and even better rum. Near as famous as the rum is its contemporary namesake cocktail, the Painkiller.

The British Navy gave it’s sailors a daily ration of rum known as a “Tott” since the 17th century. The volume and strength of these Tott’s were moderated over the years as the work became more demanding and technical until eventually on July 31st 1970, known as Black Tott Day, the practice was discontinued. The Rum was known as Pusser’s, a slang for the Purser who doled out the daily rations. In 1979, entrepreneur Richard Tobias bought the recipe and rights to the Admiralty’s formula of blending 5 West Indian rums, founding Pusser’s Rum. Tobias donates a portion of all sales of Pusser’s Rum to the Royal Navy Sailors Fund. He created a signature cocktail that became part of the trademark and marketing for Pusser’s rum. It comes in three strengths, adjusting for the daily needs of the one imbibing. Below we offer you the recipe for the world famous Pusser’s Painkiller.

The Painkiller® is a blend of Pusser’s Rum with 4 parts pineapple juice, 1 part cream of coconut and 1 part orange juice served over the rocks with a generous amount of fresh nutmeg on top. You have a choice of numbers 2, 3 or 4, which designate the amount of Pusser’s Rum! Cheers!