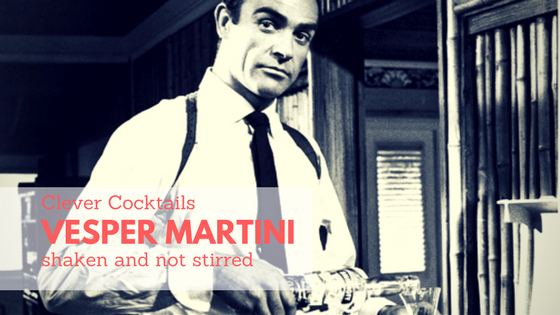 Ian Flemings James Bond character knows how to drink. He is a connoisseur of all the finer things in life. In the 1953 novel, Casino Royal, Bond invented a variation to the Martini that he named the “Vesper” after the lead female character.

In the novel Bond asks for, “A dry martini,” [Bond] said. “One. In a deep champagne goblet.”

To which Bond quips, “Just a moment. Three measures of Gordon’s, one of vodka, half a measure of Kina Lillet.  Shake it very well until it’s ice-cold, then add a large thin slice of lemon peel.  Got it?”

“Certainly, monsieur.” The barman seemed pleased with the idea.

From the pages of Fleming to bars around the world, the Vesper, also known as “The Bond Martini”, has been a classic since its inception.  It is the perfect Martini for one who is being indoctrinated to gin for the first time. The addition of vodka mellows the drink, as does Bond’s signature “Shaken Not Stirred”.  Lillet is a French Aperitif that is made from Bordeaux grapes with an infusion of botanical flavored spirits.  It comes in both Blonde and Rouge, but Blonde is used in the cocktail. It adds a citrus-quinine character to the drink.  After a hard day, settle into one or two of these. Formal Evening Attire not required!

The Vesper AKA “The Bond Martini”

Shake Vigorously Until Metal Shaker Can Freezes.  Strain into a Well Chilled Martini Saucer.  Garnish with a Liberal Peel of Lemon.