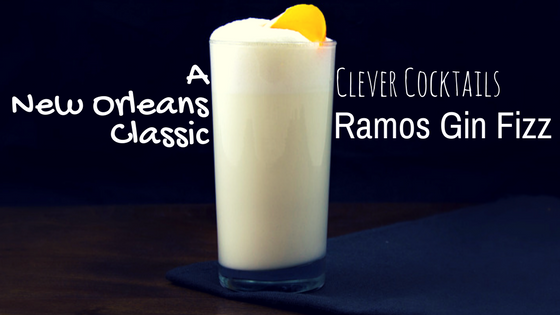 Tuesday February 13th is not any ordinary Tuesday, it is Fat Tuesday. It is when New Orleans Mardi Gras reaches a crescendo. It is a time to celebrate with a New Orleans Classic Cocktail from the golden age of cocktails. It is time for a Ramos Fizz.

The “Fizz” is a drink that was popular in the early 1900’s. Of the many variations and names, the most famous is the New Orleans’s Fizz, more commonly known as the Ramos fizz invented by Henry C. Ramos.  The making Ramos’s original drink was a show requiring a battalion of bartenders to shake the ingredients into a light frothy cloud-like cocktail. In New Orleans bars would have multiple bartenders in a sort of crazy conga line shaking the drink and then as one would tire he would pass the shaker over his shoulder to the next, and so on. Fred Waring’s Blender could have saved a lot of manpower but does not achieve the same light results. Today’s immersion blenders would manage the task well but they lose all the panache in the drinks creation.

The Ramos Fizz is a difficult drink to find outside of New Orleans due to its complex production and partly due to the fact that the drink includes raw egg white which many people are squirrely about in this day and age. Pasteurized egg whites can be had or the dried kind is a suitable safe substitute. For those who are adventurous we offer you the original recipe as follows.

In a bar shaker put the following (with no ice initially)

Shake all the ingredients for longer than you have ever shaken a cocktail and then shake a bit more. Around two minutes is great. Then add cracked ice and shake for an additional two minutes. Strain into a tall narrow Collins glass and top with club soda. The resulting drink should be milky white and frothy, lightly scented with orange blossom and mildly sweet but no so that is masks the spice of the Old Tom Gin. In as much as we offer you the original recipe we encourage adjusting proportions to your own taste.