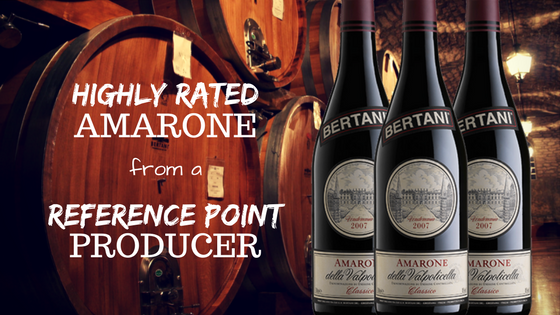 Of Italy’s most revered wines, one stands in a league of it’s own.  Produced in a style that has no rival the globe over, unmatched in intensity, character, & winemaking method.  We’re talking about Amarone.  For those that have enjoyed the richness of this style, the word alone conjures memories of some profound wine drinking experiences.  Today we offer you an Amarone from a historic producer, in a top tier vintage that is drinking well now and will continue to improve for at least the next decade.

During the mid-1800s the Bertani brothers were successful winemakers whom, like many others at the time, purchased their grapes from local growers.  Unlike other vignerons, they recognized the success of their winery relied on being able to utilize the best vineyards.  Slowly, but surely they began to acquire top sites, investing into their land holdings which over time would prove pivotal to their success.  It was in 1857 that Bertani became a fully functioning winery with vineyards and winemaking facilities that were truly ahead of their time.  Over the past 160 years, the Bertani name is synonymous with Amarone.

Today’s wine is the mind-blowing 2007 Bertani Amarone Classico, which by all accounts is as good as this style gets.  By definition, Amarone relies on dried grapes which lose a substantial amount of water, resulting in a pure, dense nectar.  Bertani’s house style takes a traditional approach to winemaking, aging this concentrated wine in large oak casks for six long years.  The resulting wine is massive in weight, deep in character and finishes long with flavor.

We were offered a limited amount of the 2007 Bertani Amarone Classico at a great price.  The Holiday’s are just around the corner and this is the perfect opportunity to snatch up a rare wine that’s been aged to perfection.