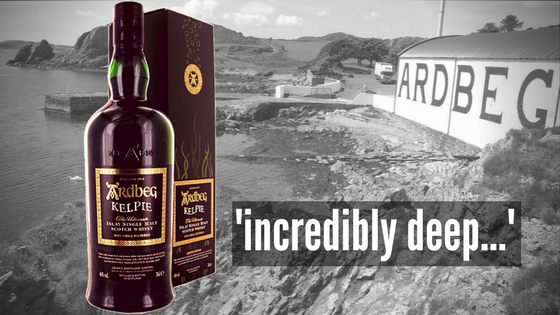 Known for sticking to the deep end of the ‘peat’ pool, Ardbeg has become a staple for the fans of heavily peated single malt scotch.  While their 10 year old is a classic, their proprietary, None Age Statement (N.A.S.) bottlings Corryvreckan & Uigeadail have been met with equal fan fare for a pretty penny.  Over the past few years, they’ve rolled out limited release, small batch N.A.S. that have kept staunch Ardbeg supporters (including ourselves) foaming at the mouth for new offerings.  For 2017, this iconic Islay producer has introduced ‘Kelpie’, a truly unique bottling that holds up to the Ardbeg legacy of peat-laced spirits yet takes cask aging in a new direction.

Kelpie references to a fabled shape-shifting sea creature living deep in the kelp ladden, rocky waters, just steps from the distillery.  As it relates to scotch, the Ardebeg Kelpie is a combination of the distillery’s ex-bourbon barrel aged spirit, blended to stock aged in virgin Black Sea Oak Casks.  Cut from the Adyghe Republic area of Russia, Ardbeg claims the resulting spirit from these casks have produced ‘incredibly deep flavours’.

With everything that Ardbeg has released to the Single-Malt Scotch world, we were extremely optimistic about receiving this limited bottling.  After an opportunity this weekend to imbibe in a dram with a nice smoke…there was a clear consensus.  Ardbeg Kelpie is another great addition to this distillery’s portfolio of limited bottlings, but one must be prepared for a unique drinking experience.  Offering classic, high toned notions of smoke, acetone, char and salty seaweed, there are intermingled aromas/flavors of toffee, vanilla, smoldering chocolate and candied fruit.  This is certainly fun to drink, but by no means a typical experience…for that, Ardbeg has nailed it!